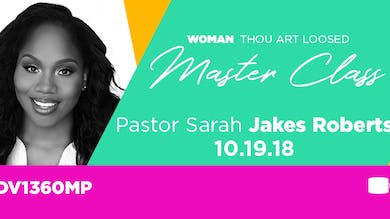 Thank you for your purchase. It allows us to continue spreading the Good News around the world and extending a hand to those in need. Our prayer is that this resource will inspire, uplift, and give you a clearer vision of what God has destined for you.

Watch anywhere on any device.

Sarah Jakes Roberts is a take-charge business-woman, writer, and media personality who expertly balances career, ministry, and family. In April 2014, Sarah released a memoir titled, Lost and Found: Finding Hope in the Detours of Life. In the book, Sarah shares her story with a rarely seen transparency that causes people gravitate to her. Sarah has received many honors, including recently being celebrated as a National Overcomer by Pat and Emmitt Smith Charities in partnership with Good Morning America co-host, Robin Roberts. Sarah has also been featured in numerous media outlets including The Today Show, Dr. Phil, Essence, The Associated Press , and The 700 Club . A naturally gifted scholar, Sarah graduated high school in the top ten percent of her class and in the nation at the age of sixteen and attended Texas Christian University, where she studied Journalism. She is the daughter of Megachurch Pastor, bestselling author and film producer, Bishop T.D. Jakes and Mrs. Serita Jakes, author, media personality and business executive. Alongside her husband, TourŽ Roberts, Sarah pastors The PotterÕs House of Denver.

All your videos. On all the devices.